Join WRW on Saturday, February 10, 2018, as we welcome Damon Suede to speak about Character and Dialogue.

Registration is required for this event and spaces are limited.

CHARACTER: Give your story a cast that dazzles. Fresh character-building techniques that go beyond trivia, backstory, and stereotypes that’ll flesh out an entire book. Archetypes, tropes, and functions of genre characters; casting your story with unforgettable personalities. Character as the simplest way to plot your story and identify your hook.

Inclement Weather: The event will take place no matter the weather.

Cancellation Policy: Please email programs@wrwdc.com if you need to cancel. Individuals who paid will be refunded their fee minus $5 if they cancel by 2/5/18. 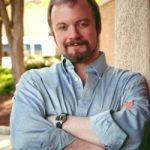 Damon Suede grew up out-n-proud deep in the anus of right-wing America, and escaped as soon as it was legal. He has lived all over: Houston, New York, London, Prague. Along the way, he’s earned his crust as a model, a messenger, a promoter, a programmer, a sculptor, a singer, a stripper, a bookkeeper, a bartender, a techie, a teacher, a director… but writing has ever been his bread and butter. He has been happily partnered for over a decade with the most loving, handsome, shrewd, hilarious, noble man to walk this planet.

Allergies: professional victims, half-assery, clichés. Damon is a proud member of the Romance Writers of America and currently serves on its national Board of Directors. He also served as the 2013 president for the Rainbow Romance Writers, RWA’s LGBT romance chapter.

Though new to gay romance, Damon has been writing for print, stage, and screen for two decades, which is both more and less glamorous than you might imagine. He’s won some awards, but his blessings are more numerous: his amazing friends, his demented family, his beautiful husband, his loyal fans, and his silly, stern, seductive Muse who keeps whispering in his ear, year after year.

WRW helps guide aspiring authors through every stage of the writing process, from outline to draft to publication. Once published, the author receives another range of services designed to help promote book sales. But for all members, the single most important thing the group provides is support. The value of having a local network of professional colleagues can’t be measured.

Please check out our meetings, and if you like what you see you can join the fun.

Tap Tap Tap – Is This Thing On?